Antarctica: Secrets of a Frozen Land

Ever wonder what it’s like at the end of the world? Look no further than Antarctica, the world’s coldest, highest, driest, and windiest continent. In this class, we’ll explore what makes Antarctica such a unique place, its significance to the global climate, and some of the weird and wonderful creatures that call the Antarctic home - from penguins and seals to giant sea spiders and glass sponges. Plus, see firsthand footage of icebergs and killer whales, and learn how you too can visit the white continent! (Yale Splash, Spring 2014) 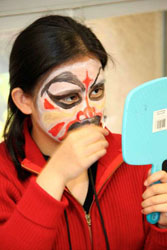 Students in this class learned about the ancient art of Pekin Face Painting. This facial make-up is applied to distinguish different roles and reveal their dispositions and moral qualities. Red stands for courage and loyalty and white represents brutality and cruelty. Students explored intriguing facts about Chinese culture and learned the application of face painting. (Stanford Splash, Fall 2009) 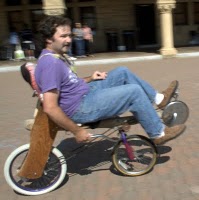 Students in this class learned about how to make very unique bikes. After an explanation of different design strategies and construction techniques (cardboard designs, wood designs), the students worked in teams to design their own bikes. These designs were reviewed at the end with ergonomics, integrity, and uniqueness in mind. (Stanford Splash, Fall 2009)

Have you ever wondered how you can image the atomic structure of materials? In this class you will learn how one basic concept of quantum mechanics allowed for the development of a state-of-the-art experimental technique, scanning tunneling microscopy, to do just this. This class will include a demonstration of Clark’s newly acquired scanning tunneling microscope.(Clark Splash, Fall 2012)

Science-fiction fans will enjoy and appreciate this presentation on the movie character that started modern sci-fi: HAL 9000, the psychotic supercomputer from Stanley Kubrick’s film, 2001: A Space Odyssey. I’ll explore HAL’s enormous influence by showing clips of him and then showing clips from other popular movies that owe their memorable images to the character of HAL. These movies will include The Matrix, the Star Wars trilogy, the Terminator series, WALL-E, I Robot, Blade Runner, and even Peter Jackson’s The Lord of The Rings. (Boston College Splash, Spring 2013)

We could go on and on about the breadth, depth, and excellence of the classes LU programs offer — but why not browse a few catalogs and see for yourself?